Development of coal shipping equipment at Port of Vostochny, Russia

Before
The shipping capacity of the existing facility was limited, and profitability was stagnant.
After
A new coal shipping facility has been developed to support the plan to double the coal supply capacity. 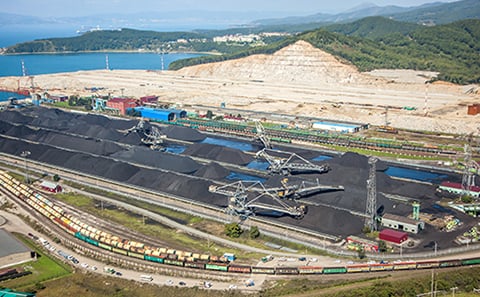 POINT We participated in the project at the Port of Vostochny, the largest coal transshipment base in the Russian Far East area, to expand the site and build an additional terminal. We developed a set of coal loading & shipping equipment to meet customer expectations and doubled the annual coal-handling capacity to about 30,000,000 t from 16,000,000 t.

Coal has long been used as an important source of energy, but in order to limit carbon dioxide emissions, many developed countries tend to be reluctant to use coal for thermal power generation, causing a reduction in demand. On the other hand, countries such as India and Southeast Asian nations continue to require thermal power generation using coal and have strong demand for it. In addition, Russia is trying to expand its coal supply capacity and increase its share in the coal market amid a downward trend in coal production in major coal exporting countries such as Australia.

At the center of this movement is JSC Vostochny Port (hereinafter, JSCVP), Russia's largest stevedoring company. The Port of Vostochny, which is operated by JSCVP and is located on the coast of the Sea of Japan, is the largest coal transshipment base in the Russian Far East region. Coal transported by rail to the base is transported by ship to Japan, China, South Korea and other Asian countries.

However, the existing shipping facility owned by the Port of Vostochny had been in operation for a long time and its shipping capacity was limited. This caused the demurrage of transport vessels outside the port, resulting in stagnant profitability due to the rise in freight rates. In response to the increase in coal exports from Russia, JSCVP built on the adjacent site a port approximately twice the size of the existing facility and added a terminal in order to nearly double the export capacity. A plan was formulated to increase the annual coal-handling capacity to 30,000,000 t from 16,000,000 t.

JSCVP positioned this project plan as the third phase of expansion work and began considering working with a new facility development partner. The existing facility that was constructed in the 1970s as part of the Japan-Soviet economic cooperation project was delivered by MITSUI MIIKE MACHINERY and the relationship between the two companies has continued to date in connection with work to renew the existing facility and other matters. Considering these factors, we were approached regarding participating in bidding for the project.

Major German and Chinese companies also participated, and the final bidding competition was held following a preliminary screening. In the end, we were in one-on-one competition with a leading German company that was superior in terms of price and specifications. JSVCP selected MITSUI MIIKE MACHINERY as its partner. The selection was supported by the performance of the existing facility that has been in use for more than 40 years since the first phase of construction and the high recognition for our technical cooperation carried out from the planning stage.

In July 2014, JSCVP and MITSUI MIIKE MACHINERY signed a development and delivery contract. MITSUI MIIKE MACHINERY has accumulated experience and know-how over many years since the first phase of construction. Leveraging them, it developed a facility with enhanced efficiency by adding the latest technologies while maintaining at the base the highly durable existing facility for which it has earned a high degree of trust from JSCVP. At the same time, we implemented measures suitable for operation in cold regions, such as heating to thaw coal.

A set of equipment for the new facility was delivered in December 2019, although the plan for the third phase of expansion work was slightly delayed due to various circumstances. Since it has not been long since the start of operation, the effects of an improved shipping capacity of the terminal are still being measured. However, the annual coal-handling capacity, which used to be 16,000,000 t, is expected to nearly double to about 30,000,000 t as a result of expanding the terminal.

Furthermore, JSCVP highly recognizes the fact that there is no need to carefully consider the compatibility with its existing facility since the new facility as well as the existing one was developed by MITSUI MIIKE MACHINERY. It expects that the new facility will enable efficient operations in addition to offering high-durability features such as resistance to rust and damage.

In the future, JSCVP is planning to further extend the Vostochny Port pier and construct a new berth where vessels moor and are anchored to handle cargo. Along with this, JSCVP also plans to expand the amount of coal loading equipment and further increase its shipping capacity. MITSUI MIIKE MACHINERY, if reappointed again as JSCVP’s partner, will continue to make efforts to boost the efficiency and durability of the base. 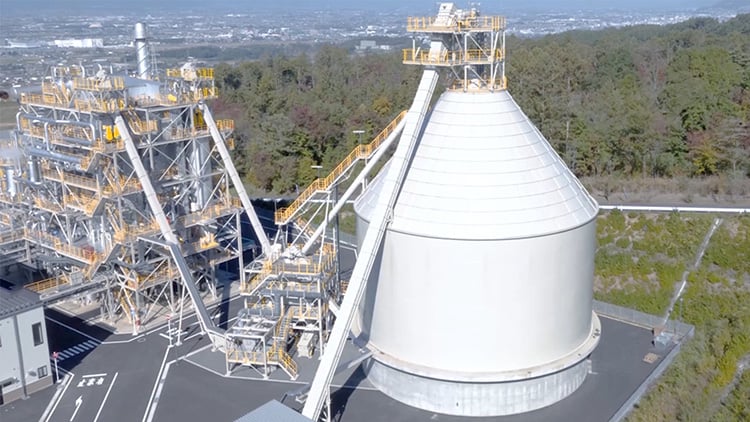